Today we’re sharing about Somying, who overcame poverty and ethnic discrimination, not only to graduate high school (which is more than most people she knew could do), but to go on to higher education abroad. When The Freedom Story began in 2008, we had a belief–a hope, really–that giving kids a chance to continue in school, when circumstances would have otherwise prevented it, would be the ticket they needed to avoid the trap of trafficking and exploitation. It was a chance we took on faith, with lots of crossed fingers. But the kids have astounded us and done us more than proud. They took the opportunity given to them, and more than merely avoiding the cycle of poverty and exploitation, they used it as a springboard to absolutely thrive–beyond even the classroom. That’s why we’ve named this year’s fundraising campaign “Thrive” – because that’s what these children faithfully do, when given the chance.

If you would like to help other vulnerable children thrive like Somying has, please donate today to help us reach our $50K goal, which will ensure our programs keep running next year. Every dollar you give will be matched so it goes TWICE as far!

Read on to learn what generous donors like you have been able to help Somying achieve. 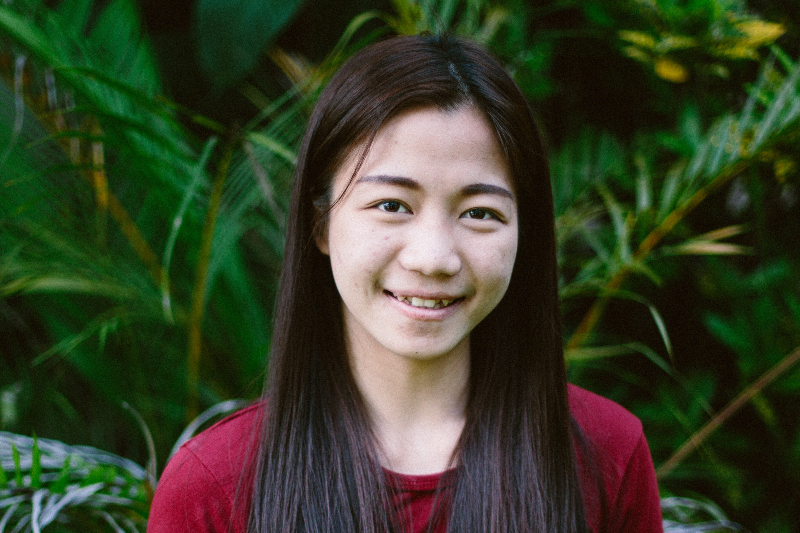 Somying is a confident, relaxed young woman with a warm smile and inviting eyes. She has worked extremely hard to reach her dreams, and her pride is clear in her demeanor.

Growing up, Somying lived with her younger sister and mother. Her mother, a single parent, supported all three of them on the $5 per day she made working at a drinking water factory. “When I was in 6th grade, my mom told herself that if I could finish 9th grade, that would be enough. In my village, everyone has only finished 9th grade. They think if you can listen, speak, read, and write Thai, then that is enough education.” As the oldest daughter, Somying would traditionally be expected to sacrifice her own education to work and support her younger sister and family. She’s also a member of an ethnic minority group that faces discrimination, which increases the odds of dropping out. All these factors put her at-risk of becoming trafficked or otherwise exploited.

When she was 15, in grade 10, she applied for a scholarship with The Freedom Story. A determined student, she had chosen the academic track at the best high school in Chiang Rai, focusing on Chinese language. While this opens up many opportunities, it makes it difficult to study and work at the same time. At that time “[the cost of my education] was so expensive, I didn’t think I would finish. I wasn’t worried that I couldn’t do the academics,” she says, “I was just worried about the money.”

The Freedom Story’s scholarships helped provide the support Somying needed to stay in school. Somying began to dream for the first time, and decided she would like to go to university in China. Her mother, while supportive, did not understand and wanted her to study close to home in Chiang Rai. The Freedom Story mentors were able to allay her mother’s concerns, and Somying was allowed to go.

Mentorship has been essential for Somying. “This is a very good place for advice,” she says. “I had ideas, but I needed to talk to people about whether my choices and ideas were good. I wanted someone to listen and counsel me, so that I could be confident that my choices were right. I had roadblocks along the way, but everyone here would encourage me by saying, ‘You’re so close to success, Can you see it? It’s just around the corner.’ It made me think, ‘Yes! Others are confident I can do it, why aren’t I confident? And it would make me get up and keep going.’” For many of our students, having older friends who can encourage them is life changing. They are able to relate to their experience because they themselves went to university–something many of the guardians of our students were unable to do.

More Than Just the Classroom

Somying says her first year in China was a huge challenge, especially with the language. But she embraced it. “Experience is so important. It is more than just the classroom or books. There were so many challenges: going to the movies, going to the bank, practicing speaking. I would think, ‘What will I learn today?’ In the classroom they would have us practice role-playing, but that was nothing compared to going outside, using my words and having others actually understand me. When native speakers could understand me, I got so excited.” She talked to her mom every day, reassuring her that she was okay, helping her feel more at ease with her daughter’s new life.

Somying was so successful, she has been able to help one student every year get accepted to her university in China. She played a huge role in orienting those students into life in a different country by taking them to the supermarket, to open bank accounts, and more. She says that “I had others supporting me, so I wanted to pay that forward and help the younger students.”

To help other children who are at-risk of being trafficking or otherwise exploited turn their impossible dreams into a life where they are thriving and helping others do the same, please consider contributing to keeping our prevention programs running next year. Just click here to give now!

Why We Don’t Say “Child Prostitute”