Today we’re sharing about Fai, who is overcoming significant loss, to navigate a path toward greater connection and more stable footing in the world. When The Freedom Story began in 2008, lack of education was the refrain we heard over and over again about why people ended up in the sex industry, even as children. But over the years, it became abundantly clear that education was about more than the degree you get at the end, and prevention was about more than just going to school. When we come across kids like Fai, whose vulnerabilities are thick and layered, our commitment to them must be equally deep. The support our Freedom Chapter sponsors have given Fai through his hardships have literally been life-changing. Here is his story.

Fai* was only 8 years old when his mother died in a car accident. She was his introduction to The Freedom Story, as she would bring him and his older sister to the resource center to attend the after school and Saturday programs. After she passed away, Fai was accepted into the scholarship program. He is fourteen now, and has been a scholar with The Freedom Story for more than six years.

Fai is good at computers and loves jigsaw puzzles. He has struggled with ADHD but finds that puzzles help him concentrate. He likes the boy scout activities at school where he learned skills like how to start a fire. He also likes playing badminton and basketball with other students and staff. “He’s a colorful student, always teasing the staff and making them laugh, and when we think about our scholarship program, we think about Fai, what we can do to make him laugh, and that makes us more active,” explains Kru Ball, the Education Program Manager. Fai has a close group of good friends, most of whom come to the center almost every day, and he enjoys doing activities with them. 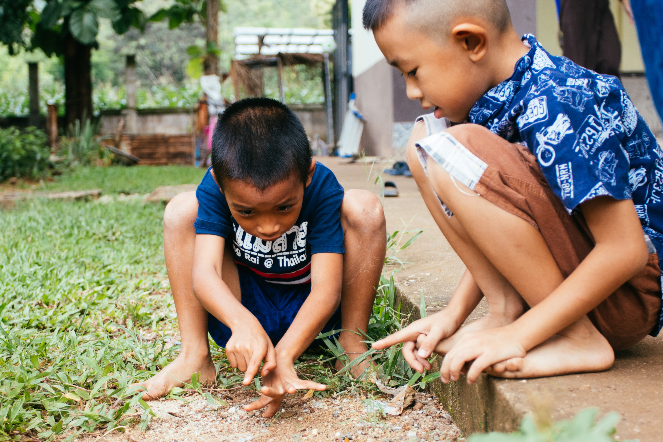 After his mother passed away, Fai and his sister were living with their father, who struggles with alcohol abuse. The father’s alcoholism had a significant impact on the family’s income and stability, as he was often unable to work or would disappear for days at a time. “I loved being with my mom and playing with the chickens, but now I feel lonely. I put the TV on so I can sleep when I’m alone,” Fai admits, shyly. Recently, Fai’s house had their electricity cut off for two months because there was no money for the bills. Fai’s family has some of the lowest income in our program, usually making no more than $60 per month to support the three family members. To help make ends meet, Fai’s father would borrow money against their family land, but being unable to pay it back, they’ve been slowly losing parts of the small plot of land that they’ve had for generations.

This poverty puts him greatly at-risk of dropping out of school and being trafficked, as his father cannot pay for his education. But beyond that, “Fai is at-risk of being trafficked because he’s missing love, and the opportunity that he would choose the wrong path is very high. In his family, he feels he doesn’t have anyone he can talk to. Without The Freedom Story, he’d have very few options. He can’t even dream about what he wants to do because he doesn’t have any money,” explains Kru Ball.

Fai comes to The Freedom Story’s resource center every day, spending time with staff, other students, using the computers, doing his homework and playing games. He admits that if he didn’t come to the center, he’d be home alone.

What The Freedom Chapter Helps Achieve

Thanks to our Freedom Chapter sponsors, Fai has also received a financial scholarship and the support he needs to stay in school. This includes a recent trip to the hospital, when The Freedom Story staff took him for treatment for a dislocated shoulder he got from a fall while playing.

Earlier this year, Fai and his father attended our family camp, playing games, doing activities, and learning how to communicate and connect with each other. “My relationship with my dad has improved. We talk to each other now. In the past, I didn’t like talking to my dad, so I would just stay in my room. I thought he didn’t understand me. Now I tell my dad about my day at school,” says Fai.

Weekly home visits from The Freedom Story staff have also helped Fai’s father decrease his alcohol use significantly. In the past he was often absent, and would not make dinner, leaving Fai to fend for himself. When staff would visit, he wouldn’t be home. Now, he makes dinner and Fai and his father eat together. Next year, they will be participants in our sustainable livelihoods program, learning how to utilize the land they have to grow organic vegetables for more income.

We are incredibly proud of Fai’s growth and development despite his difficult background. He is at an important age in terms of development and risk, explains Kru Ball. But his growth is positive. While he was once quiet and reserved, now “he can take care of himself. He is more confident to share his ideas, and his relationships with the other students have grown,” says Kru Ball. Next year Fai will move to study in Chiang Rai city, and he is looking forward to going to high school.

If you would like to help other vulnerable children like Fai as they find a way to thrive, please donate today to help us reach our $50K goal, which will ensure our programs keep running next year. Every dollar you give will be matched so it goes TWICE as far!

*Fai’s name has been changed, and he is not pictured in the photos here, in order to protect his privacy.