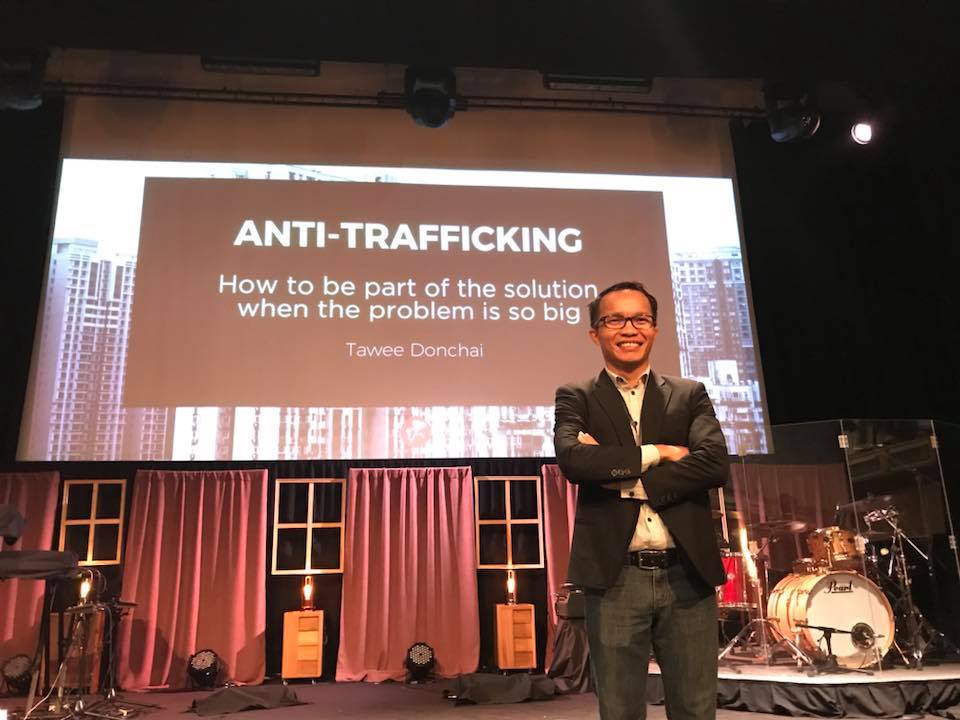 Today we’re talking with Tawee Donchai, who grew up in the community in which The SOLD Project/The Freedom Story was founded and is based. Despite growing up with hardships similar to the ones our students face, Tawee and his twin brother Worn were able to excel in their studies and go on to higher education. When Rachel Sparks came to Thailand to create the documentary, she met with Tawee–and what started as a little idea turned into something much bigger: the growth of The Freedom Story as an organization, with Tawee at the helm as Thailand Director. He shares his reflections with us here.

TFS: How did you first meet Rachel Sparks and the Laughing Angels film crew?

TD: I was introduced to Rachel by my friend. We had a mutual friend who told me Rachel was looking for a translator and she was working on a human trafficking documentary. I had just graduated from Chiang Mai University with a Master’s degree and I was in-between, unsure whether I should be doing ministry serving, or whether I should work as a researcher. When I got introduced to Rachel, we met in Bangkok. Rachel and the director told me about the project and what they wanted to do, and they wanted to hire me as an interpreter for the interviews. When I asked them about human trafficking and learned more about what she knew, I realized I knew what they were talking about. Since I was 6 or 7 years old, I had seen it in my community but this was the first time I heard the term, and had the vocabulary to put to it. I knew exactly what they were talking about it, I had seen it, and the effects, the damage, and the families that had been destroyed by it.

So I told them about my life, growing up and witnessing it, and how I had the opportunity to pursue education and that I wanted to do something about [trafficking]. I told them they could come visit my village and learn about it, and see what stories they could get.

I talked to my teacher about the documentary and what we wanted to come out of it. My teacher told me about Cat, and how she fit the kind of story we were looking for, and that she wouldn’t be shy to answer questions in front of the camera.

TFS: Did you know other people personally who had been trafficked?

TFS: Did you have any idea about what would happen, or what this project could lead to?

TD: I’m still surprised at how naïve I was about what it could lead to, or how it could affect the village’s reputation. I just led by the feeling that this was a story that needed to be told so people know how it affects people’s lives, so that people will do something about it. That’s all I was thinking about.

I think so far we’ve been able to avoid any negative impact on the community by not focusing on labeling it in a bad way. In the beginning, people hesitated, but it helps that we talk about it indirectly, and focus instead on what we can do together. Because I come from this community, I feel like I’m sensitive to or aware of what might go wrong, so when we do things I’m able to think twice or three times before approving anything. Also, we care about people and they can sense that.

TFS: What has the organization’s growth looked like from your perspective?

TD: It started like my dream, and now it’s more like the community is involved in growing and sharing that dream and making into something bigger than the original picture. The dream is like a living organism that grows, expands and changes organically to fit the community’s needs. As it grows, it includes the kids’ dreams, parents’, staff’s dreams. It’s bigger than any one single person. I want everyone involved to have ownership and share in what it can become.

It’s more complex. It answers the question better than just my own perspective could have.

TFS: What kind of changes have you seen in the community in the last 10 years?

TD: The families are more involved, the kids feel like Watanseree is their second family or second home. The kids have a bigger dream beyond what we thought they’d grow into. The community takes part and respects us even more than when we started. The community is stronger than before. In the past they were almost on their own. They participate more and trust us, they ask tough questions. In the past, they would be too afraid to ask questions, fearing we’d cut their scholarship or not help them. But now they ask questions, which is great because it shows they’re more empowered.

Even the kids don’t copy each other’s answers anymore, or try to give the “right” answer. Their dreams have grown so much too. Before, no kid had the dream of coming back and helping others. But now the kids pursue that as a career. They want to be social workers. They want to do web design, they want to translate Japanese novels/comics. Ten years ago, there was no answer like that. They had only a few ideas of what they wanted to be: either teacher, soldier, or nurse. Their world was limited. But now they have so many more ideas. They want to run their own business, they want to be lawyers, engineers, social workers, interpreters. It reflects the change in how broadly their perspective and dreams have grown.

TFS: What do you hope to see in the next 10 years?

We are forever indebted to Tawee Donchai for his deep understanding of local culture, and for stepping up to be the forefront of change in his community. His gifts and vision have been instrumental in making everything possible. We thank him for his time in sharing his perspective with us today!

Want to help invest in prevention? There are lots of ways to join!
Participate today!